In 1978 Jimmy Graham, a thirty four year old happily married the father of two, scored his dream job with Operation Deepfreeze – training American scientists in survival skills in Antarctica. He left in December of that year. Three months later he arrived back agitated and paranoid. He said that while out on the ice he had stumbled onto a secret American nuclear site and the CIA had given him a chemical lobotomy to keep him quiet. Jimmy rapidly descended into schizophrenia.

His behaviour became so frightening that his wife Frances fled to safety, taking their two children Sean and Juliet with her. For thirty years the family lived with this story, but no one ever dug deeper. The man they loved went away sane and came back permanently fractured – his mind was a blizzard. Now Juliet wants to know what exactly did happen on that frozen continent.

First she must locate Jimmy, who she finds now living a marginal, alcoholic life in a country town from where he has had little contact with his family for the past 3 decades. Juliet is now in her mid 30s and lives five hours from him in the city with her husband and two children of her own. Now she wants her father back. She wants a grandfather for her daughters, but will she be able to reach this fragmented man who longs to reconnect with his family?

The starting point is to ask ‘what if Jimmy’s version of events is true?’ Operation deep freeze not only existed, it still operates today as the support operation for US Bases in Antarctica. The CIA has been exposed over and over again as having conducted illegal drug experiments, illegal interrogations and covert operations for the last 50 years.

To find the truth Juliet takes us to Australia, New Zealand, Antarctica, Scotland, Ireland and the United States to put together the pieces of that summer in Antarctica. Meeting New Zealand Antarctic program co-workers, his climbing friends, members of the 70s communes the family lived in, the people behind Operation Deepfreeze, and others who were down on the ice in the summer of 1978. Juliet’s quest takes her across the world revealing along the way an Antarctica much scarier than anyone thought as she unturns stones some would prefer left alone. Like explorers Scott and Mawson she too ventures into an unknown continent as she travels into the uncharted frozen centre of her father’s mind and her family’s memory to bring to bring some sort of closure and get back what of her father she can. 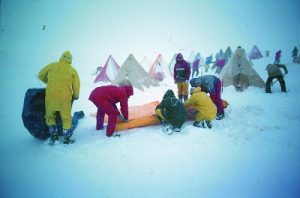 “Whatever your stance, Stone’s compelling film opens Pandora’s box and promises to change the conversation for years to come” – Sundance Film Festival

“When was the last time you saw a documentary that fundamentally changed the way you think?… Pandora’s Promise is built around what should be the real liberal agenda: looking at an issue not with orthodoxy, but with open eyes” – Owen Gleiberman, Entertainment Weekly